This is a variety of Japanese Timber bamboo but only gets about half as large. A small percentage of the canes have a “zig-zig” at the base thus the name “Slender Crookstem”. I assume it’s called slender as the canes of this variety get to about 3 inches in diameter while the species gets up to 6 inches in diameter. Since only a small percentage of the canes have the zig-zag it can be difficult to tell the difference. We have several groves of this bamboo near the nursery and it seems to be quite common in the southeast. The image below is of a grove nearby that covers about an acre. It bordered on two sides by power-line right of ways and on another side by a road. This has kept the bamboo grove from extending even further but the other side is a yard and in the picture you can see it is just waiting to take over if the owner ever stops mowing! It is a very impressive grove and fun to walk through as the canes are very dense and it is quite dark once inside. ”
My own experience with this bamboo is that it can be very aggressive. I planted a grove in 1995 near my Moso bamboo grove. It expanded so rapidly that there was soon a danger that it would invade the Moso. After just a few years it covered an area about 50′ by 75′ and I became alarmed. I used my tractor to clear as much of the bamboo as possible, digging up as much of the rhizomes as I could and mowing all above ground growth. This slowed it down but I spent the next few years removing every sign of growth. Today I have managed to eliminate the grove but it took a lot of work. The only way I could stop all new growth was to cut every small piece of new growth and spray the base of the cut cane with herbicide. I have not planted it again as it is quite common in my area. 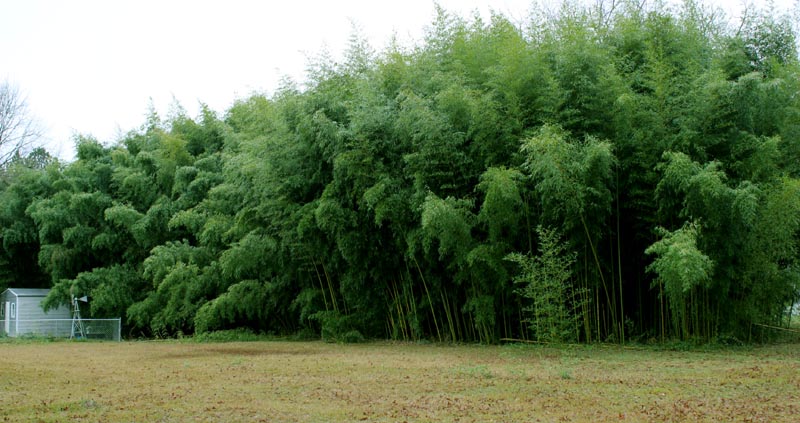