How to build a bamboo Fence

With a decay resistant support and frame, this traditional looking bamboo fence should last for years.

We had a shop that we wanted to hide and didn’t want to wait for our Leland Cypress trees to hide it. (Yes, we used Cypress instead of bamboo; the bamboo would get out of hand and was in an area where it would be very difficult to control.) A bamboo fence seemed like the ideal solution and we are very pleased with the results. 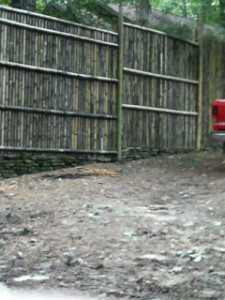 A couple of years ago we decided we were tired of the old wooden fence that helped hide my workshop. The fence needed to be taller and we just naturally wanted a fence made from bamboo. We also wanted the bamboo to last several years before having to replace any part. The fence had to look good but we didn’t care that it was far from traditional! 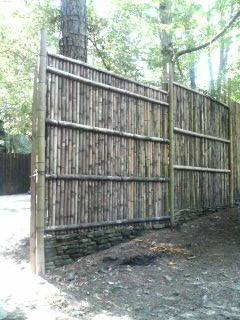 We used pressure treated 4 x 4 post for the basic supports, spaced 8 feet apart.We dug holes about 24″ deep, placed the post in the holes, and back filled the holes. Since our fence would be fairly tall, and we wanted it extra sturdy, we used concrete in the holes. Make sure the post are straight and vertical and give the concrete a day of so to set. It’s a good idea to brace the post temporarily.

For a framework on which to hang the bamboo we used treated      2 x 4’s. We spaced these at about 6 inches from the ground, 6 inches from the top and about 2 feet apart in between. We used 3 inch, galvanized screws to connect the framework to the post. An electric screwdriver made this much easier than nailing and you will definitely need the screws and electric screwdriver for all the bamboo strips you’ll be adding

Once you have the basic framework constructed, it’s time for the bamboo! Most of the canes we harvested were Japanese Timber bamboo, some were P.vivax, some Robert Young Bamboo, and a few Pigskin bamboo. We used canes about 2 to 3 inches in diameter and split them down the middle. With bamboo this is fairly simple. We used a special tool for splitting the bamboo but a machete or similar tool works well also. With 2 inch canes you’ll need about 5 to 6 per foot of fence. (Depending on how close you space them)

Once you have split the bamboo you will need to drill a pilot hole at each point where the bamboo touches the framework. This will keep the bamboo from splitting when you screw it to the frame. We used galvanized screws about 2 inches long and placed one at each 2 x 4. This was the most time-consuming part of the project! Once you have attached all the pieces of split bamboo to the frame you will be left with a long, horizontal line of screw heads on the front of the fence. To cover these we used another piece of split bamboo placed horizontally across the front of the fence.

We used long screws to attach these horizontal members and then covered the screws with the black rope shown on the left. To finish off the fence we took one of the larger pieces of bamboo and split out about 1/3 of the cane leaving a cane that would fit down over the tops of the split canes. This is shown at the top of the picture on the right.

One final finishing touch was to place large, 3 to 4 inch canes over the upright post at the ends and between each panel. The rock-work was needed because the fence was on a hill and we didn’t like the look of big, triangular gaps under each section. Where the ground was level we left 4 to 6 inches of space to help keep the bamboo from rotting so fast. After 5 years (2011) the bamboo has gone from green, to tan, to finally gray but is still in good shape. 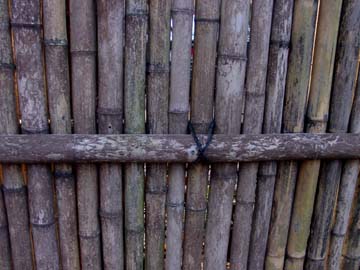