This is the largest of the cold hardy bamboos. With canes up to 7 inches in diameter, walking through a grove of Moso is like being in a strange and beautiful forest. The leaves are somewhat small and give the grove a “feathery” look. Canes are covered with a soft hairs and flare out near the base giving them a very distinct look. After 12 years my largest grove has multiple canes 6 inches or more in diameter. The ground is well mulched with bamboo leaves and the dense growth shades out any weeds.
In the spring new shoots of Moso are fascinating to see. On a good year there will be hundreds of shoots although only about 50% will continue to grow after the first week or so. This species shoots very early, usually in March. When a large shoot comes up it heaves up the ground around it. These can be eaten and are the main source of bamboo shoots in China. The large sheaths that surround each internode on a new cane is almost the size of a piece of paper and was used to wrap meat and produce in Japan in the past.
Moso grows in vast forest of bamboo in China and it used for many bamboo products including bamboo flooring. The canes have very thick walls and can be split and sawn into small boards.
These are new canes, about 10 feet tall. The dark coverings on the canes are called sheaths and are the protective coating for each section of cane as it grows. On most species these fall to the ground as the canes grow. These giant ones were once used to wrap fish in Japan, they resemble large pieces of heavy paper, slick and shiny one side and covered with soft hairs on the other.
Moso is sort of the “Holy Grail” of bamboo. It’s the largest “cold hardy” bamboo and just has a look distinct from anything else. I’ve traveled all over the southeast just to visit and walk some of the well known Moso groves. Some of the most famous groves of Moso are in Anderson, SC and Avery Island, LA. Our own mature Moso groves are as impressive now many we’ve seen. 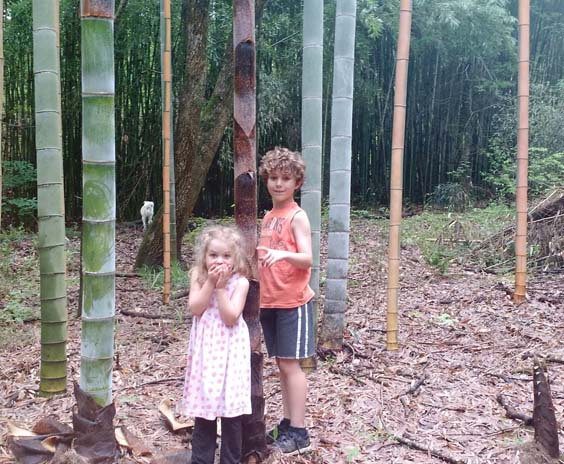 desc of above above pic