This bamboo is probably most famous as the species used for the traditional Japanese Shakuhachi flute. It is widely grown in Japan and makes up over 60% of the bamboo harvested for various uses there. With thick walled canes that are very straight and erect, it is ideal for building and construction. Madake (Japanese common name) compares to Tonkin cane (Psuedosasa amabilis) when tested for strength and workability. The shoots are edible but bitter.
Japanese Timber bamboo is widely grown in the U.S. and is quite common here in the southeast. It looks very similar to Vivax bamboo (Phyllostachys vivax) but is somewhat straighter and has thicker walled canes. Both get very large and are considered the second largest temperate bamboos, after Moso. It is ideal for building fences, digeridoos, and flutes.
The large canes of Phyllostachys bambusoides are ideal for construction and crafts. I love walking through a mature grove of this bamboo with canes that are 4 to 6 inches in diameter towering overhead. I always use this bamboo when we need a strong, straight cane.
The large grove of Madake (below) is just down the road from our bamboo nusery. Over the years the owner has allowed me to cut canes that we used for a fence and dig plants for my nursery as well as dig roots for a Shakuhachi. I’ve had a couple of different flute builders that came to dig roots of Madake. This grove grows in a former corn field and the soil is sandy and fairly easy to dig. When I first visited this bamboo several years ago the grove was about 75 feet in diameter. The owner kept it under control by mowing and disking around the grove a couple of times a year. At some point the home became a rental unit and now the grove covers close to an acre. It’s about reached it’s limits with heavy woods on the north and south and a creek in the back (eastern) side. But the front (west) is wide open. 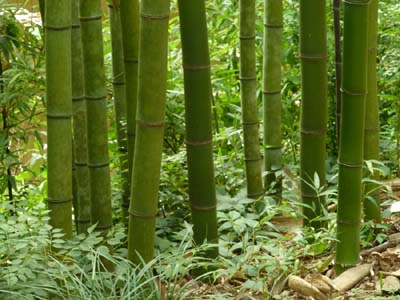 Culms of Japanese TImber Bamboo.  These are 3 to 5 inches in diameter.  The canes can get up to 6 inches.

desc of above above pic